Scheduling matches using only the comment section of the corresponding match page has always been cumbersome and ineffective. Often it became rather unclear if or when a match has been scheduled as the entry on the sidebar got spammed away or teams tried to schedule multiple matches at once and some stuff got mixed up.

But not only the teams themselves got lost in the scheduling madness that happened during the season as casters and referees tried to stay up to date with what happened in terms of scheduled matches.

Therefore we now introduce the first iteration of our new match scheduling feature. Please be aware that this is only the first ‘working’ release and is not fully integrated yet so we appreciate your feedback as you start using it.

How does it work? 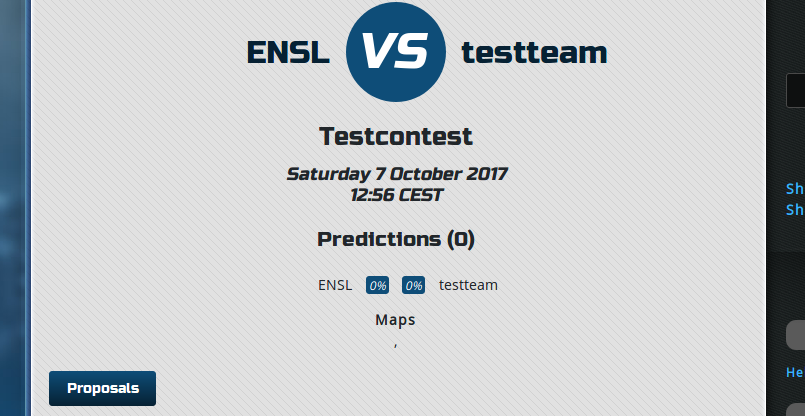 Each match page now has a ‘Proposals’-button that can be seen by players whose primary team is participating in the match. (Admins can also see this button.) This leads you to a list of already made scheduling proposals. If you are a leader of one of the playing teams you will see a button which lets you create new proposals on behalf of your team.

Depending on whether or not a proposal listed here is created by your team and the state it is currently in you do have a certain set of actions available. The following table gives you an overview:

(Creator Team is the team that created the proposal) 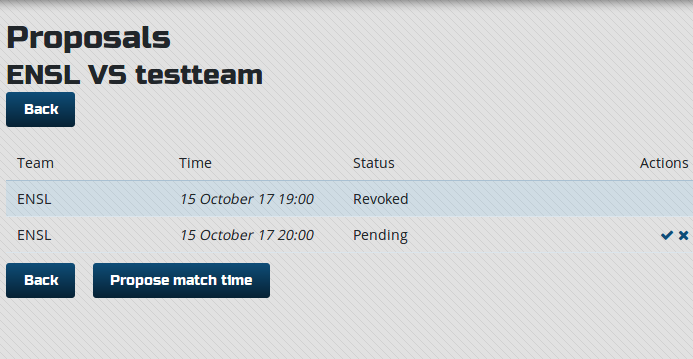 Whenever a new proposal is created or an existing proposal gets updated to a new state the opposing team does receive a message on ensl.org informing them and linking to the proposal list. Be aware that in case there already is a confirmed proposal for a match new proposals cannot be created anymore unless the match gets delayed or the confirmation is revoked by one of the teams.

The states a match can be in are: pending, revoked, confirmed, rejected and delayed. As the first four of them are quite obvious no further explanation will be given (if you still need one send a pm to Absurdon) the delayed state however is a bit special though.

When reaching a critical timespan (30 minutes before the proposed time) players are not able to change the state of any proposal anymore. For pending matches this is no issue as they can just be ignored in the future. Should the match be confirmed already it can only become delayed. Delaying a match is an action only an admin not part of any of the teams can fulfill as special rules apply here.

Okay so this is all cool but how do I get a better overview now? 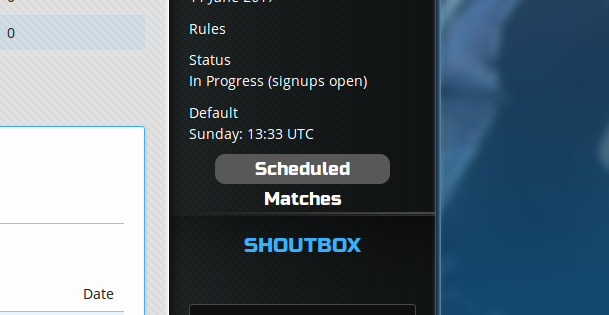 To provide a better overview on scheduled matches the contest page got itself a new button. When in the detail view of any contest the sidebar on the right side yields a brand new ‘Scheduled Matches’ button which leads you to a list of confirmed matches. The formating is a bit off but that will be fixed later.

Nice! And what is planned for in the future?

As of now the following features and improvements are planned:

Found a bug or have any other feedback

We all aren’t perfect as is this new system so if you found anything not working as intended or have suggestions on how to improve it send a PM to me (Absurdon) here on ensl.org or on discord. I will have a look into it. Please be aware as I’m currently quite short on spare time so I might not respond immediately. Also not all suggestions can be implemented immediately or at all so keep that in mind.

If you have any further question on how the system works the same applies.

HF GL and GGs everyone